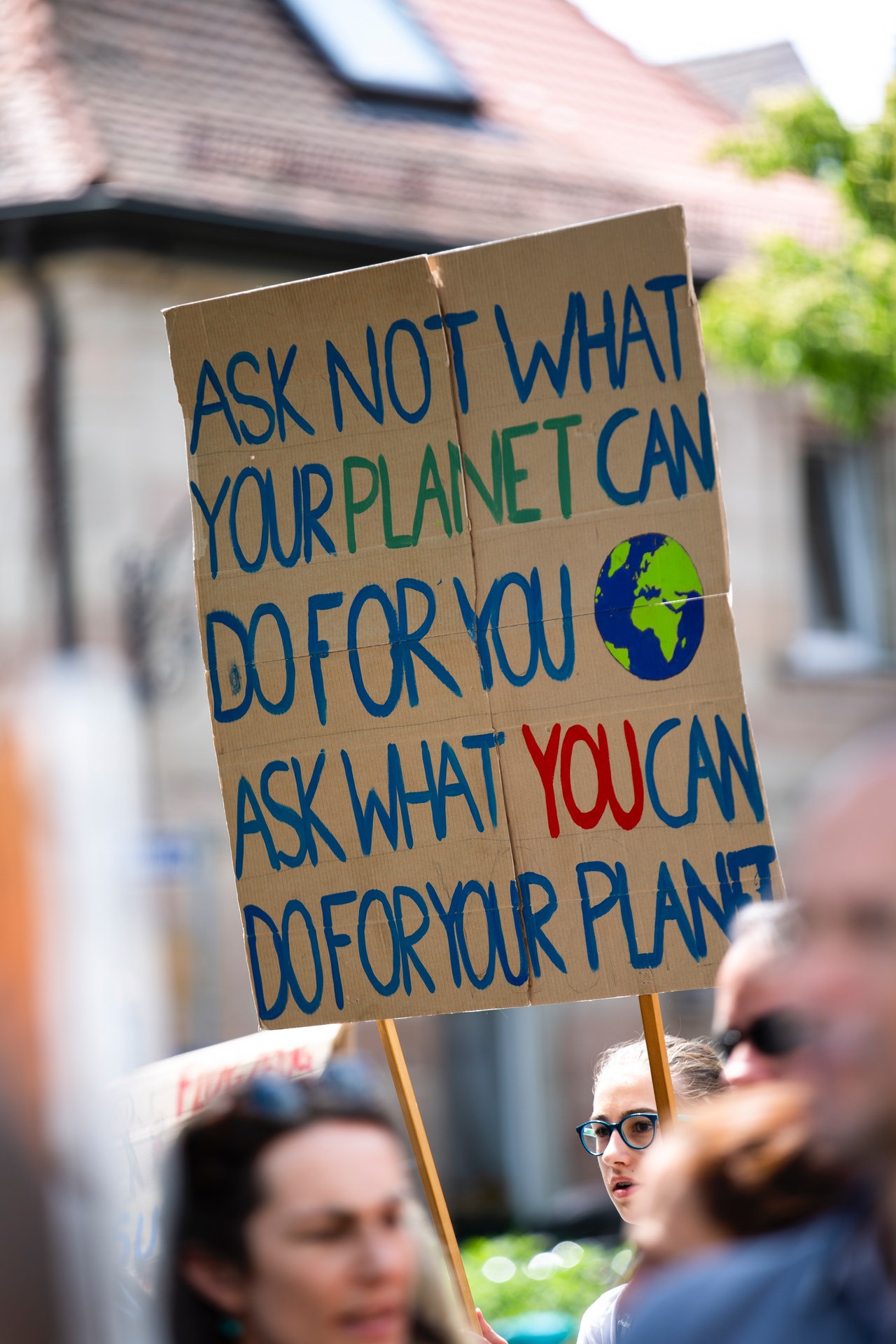 An explanation of our climate crisis.

I was inspired to give my attempt at explaining our planet’s climate crisis to the best of my knowledge after my friend Kim text me asking “if you could recommend one article to educate myself on the climate crisis, what would that article be? I’m starting to think about it a lot in the context of my 1-year-old’s future world.”

I’m not suggesting this is the article, but it made me realise I could be doing more to help people understand the issue and empower them to help solve it (see my list of actions you can take below). Besides, I’ve never written down my explanation of it and this seemed like the ideal opportunity.

Quick disclaimer, I’m no climate scientist and this has taken me quite some time to understand, let alone explain to others. I’ve referenced points throughout.

The earth is round (I’m not going to reference that) and it is surrounded by an atmosphere that protects the planet from ultraviolet radiation, solar wind and cosmic rays. Or in other words, it stops us from getting completely roasted. It also, really importantly, traps heat like a duvet on a bed. But more on that later.

Earth’s atmosphere is 78% nitrogen, 21% oxygen and 1% other ingredients—the perfect balance to allow complex life like us homosapiens to breathe and live.

The closest star to us (the sun) is radiating huge amounts of energy (that we experience as heat and light) across our solar system and some of it hits our planet which is trapped by our atmosphere (although lots also escapes back into space). This trapped energy warms our planet and atmosphere which creates the perfect temperature for life to exist and also, crucially, for there to be liquid water.

Amongst scientists, Planet Earth is known as the “Goldilocks Planet” because the conditions here are just right for life to exist. Earth has just the right amount of mass so the force of gravity doesn’t crush us but also holds the atmosphere in place, and Earth is just the right distance from the sun so that we aren’t too hot or too cold. Just right.

Humans have been around for about 200,000 years. If the history of planet earth was compressed into one-year humans have been on this planet for 24 minutes, we have been farming for 1 minute, and the industrial revolution has been going for 2 seconds.

Just take that in and try to work out what your lifetime would equate to….

Over these billions of years the earth’s climate slowly came into a balance (between the fire and ice) that has created the perfect temperature and the perfect balance of the gases nitrogen, carbon dioxide and oxygen in the atmosphere for complex life like mammals, reptiles and birds to thrive. There has been much life on this planet before we evolved (that survived in very different climatic conditions) that when it died fossilised and disappeared under the earth. The heat and pressure of the earth over millions of years then turned those fossils into coal, oil, and gas. Now collectively known as fossil fuels.

While earth’s climate has been in this ideal balance humans evolved and we have managed to create the world we know today. The first humans simply used “manpower” or their bodies to catch food, sharpen tools, move dirt and so on, but over time we improved our technologies and as they improved we needed to find new ways to power them. We went through a period of using animals to do the heavy lifting, then we burnt huge amounts of wood that heated buildings and powered steam engines. Then there was the discovery of coal that was more energy-dense (has more matter) than the wood so much cheaper and more efficient. It was then discovered we could use coal to power steam engines that spin turbines to create electricity. Coal-fuelled power plants currently fuel 38% of global electricity.

Then came oil. Oil that could be used to make petroleum to power combustion engines that revolutionised transport across the globe. And also, of course, natural gas.

These cheap and abundant forms of energy saw the rise of the industrial revolution (generally thought to have started in the late 1700’s to early 1800’s) which delivered a massive acceleration in human advancement across the globe. But with that came a massive increase in the need to extract and burn more fossil fuels.

And here’s the kicker – although burning fossil fuels releases huge amounts of cheap energy that has revolutionised the world – it also releases Greenhouse Gases (GHGs).

GHGs are given that name because when they are in the atmosphere they let through light but absorb and trap heat like a greenhouse does.

According to NASA, there are 5 main GHGs but the one having the biggest impact on our planet’s climate crisis is carbon dioxide (CO2).

A major reason the world has had a relatively stable climate and atmosphere for quite some time is because the carbon cycle has been in a perfect balance which is thanks to the plant life on this planet.

Photosynthesis is the key to it all. It is the process whereby plants use the sun’s energy to suck in CO2 and suck up water (H2O), create carbohydrates (a molecule containing carbon (C), hydrogen (H) and oxygen), then breathe out oxygen (O2). It’s also crucial to know that plants feed the soils with these carbohydrates through their roots which stores the carbon in the ground (out of the atmosphere). This is known as “carbon sequestration”. 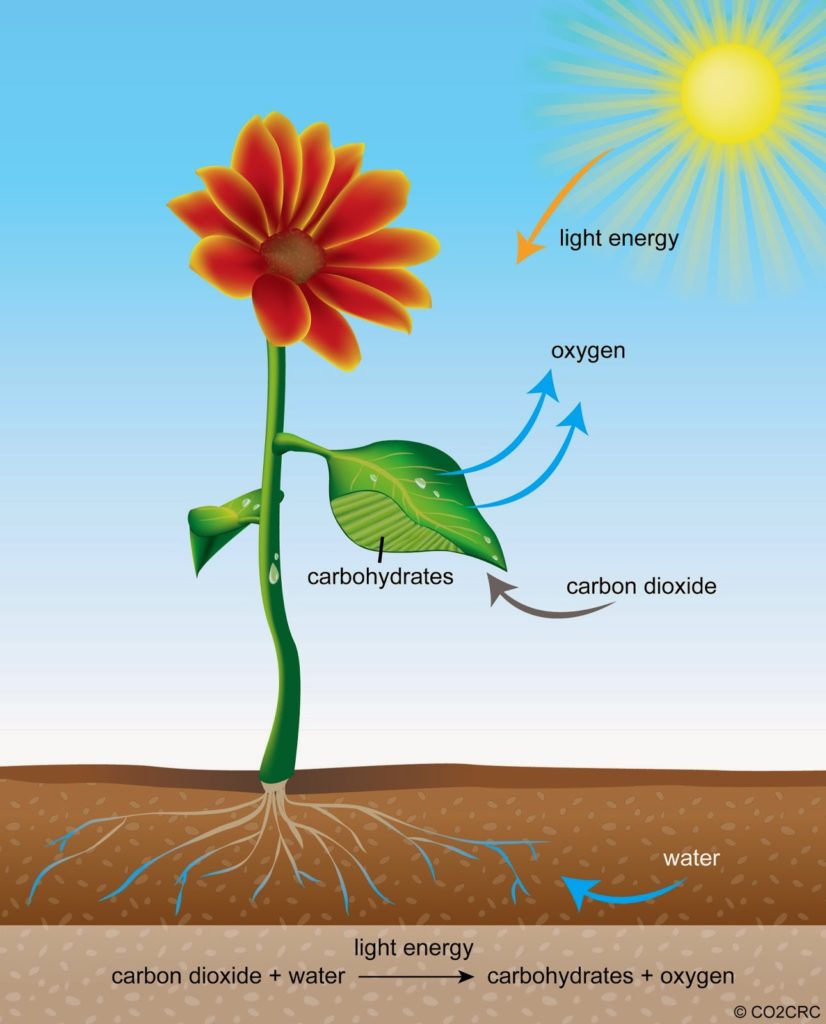 Rather helpful considering us animals breathe in oxygen and eat carbohydrates (meat comes from animals who have eaten carbohydrates).

Before we started burning fossil fuels on such a colossal scale the amount of CO2 in the atmosphere was around 280 parts per million (ppm) and it hasn’t been over that for at least 800,000 years. (We know this because scientists have drilled ice cores and measured the ancient gas bubbles trapped inside).

The current atmospheric level of CO2 is over 400ppm. (It’s now measured by a special sensor located at the Mauna Loa Observatory in Hawaii. You can get daily updates here)

Because we’re now extracting fossil fuels from out of the ground and burning them for their energy, while at the same time cutting down huge numbers of trees (the global tree count has fallen by 46% since the beginning of human civilization) there’s excess CO2 building up in the atmosphere. This excess CO2 is now trapping more and more heat (the gas duvet is getting thicker and thicker) causing our planet to warm up. This is Global Warming.

And when the globe warms the climate changes.

(Huge amounts of carbon are also being absorbed by the world’s oceans changing the acidity of the water but that’s beyond the scope of this article.)

As the earth gets hotter there is more energy in the atmosphere so we are experiencing more ferocious storms. The recent hurricane in the Bahamas was the second-strongest Atlantic hurricane on record, based on maximum sustained winds. The warmer atmosphere is also changing the water cycles causing more prolonged droughts in some areas and biblical rains in others. And ice, snow, and permafrosts (land that is permanently frozen) are melting on a massive scale causing sea levels to rise and large reserves of GHGs to escape.

One of the most scary parts about these changing climatic conditions (other than more frequent and more ferocious storms) is the impact of droughts and flooding on the world’s food supply. This, along with rising sea levels, will create climate refugees who will need somewhere to go putting huge pressures on geo-politics.

There is an organisation called the United Nations Intergovernmental Panel for Climate Change, or the IPCC for short. They are basically a group of all the best climate scientists on the planet. Every year or 2 they put out a report that updates the world on how serious the climate crisis is. (It’s really bad). According to the report they released in October 2018 the planet has already warmed up between 0.8°C to 1.2°C since before the industrial revolution, and they are now screaming at the world to keep the planet below 1.5 °C. If the global temperature goes over that 1.5 °C threshold we will cause a domino effect of events that will destroy our planets perfect balance.

It’s important to note that all the GHGs we have already emitted into the atmosphere “will persist for centuries to millennia and will continue to cause further long-term changes in the climate system.” 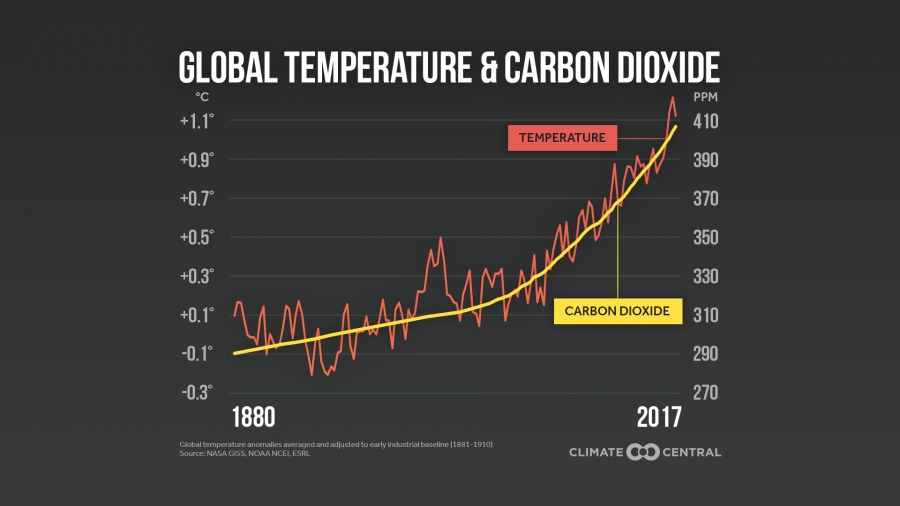 The science is really clear and the scientific community are yelling at us all to make massive changes, rapidly. The same 2018 report from the IPCC stated that the world would have to reduce its carbon emissions by at least 49% of 2017 levels by 2030 (12 years, now 11) and then achieve carbon neutrality by 2050 to meet this target.

To achieve this they said “limiting global warming to 1.5°C with no or limited overshoot would require rapid and far-reaching transitions in energy, land, urban and infrastructure (including transport and buildings), and industrial systems. These systems transitions are unprecedented in terms of scale, but not necessarily in terms of speed, and imply deep emissions reductions in all sectors, a wide portfolio of mitigation options and a significant upscaling of investments in those options.”

It’s a lot to take in and it may take you some more reading to completely wrap your head around, but imagine if everyone in the world understood that. (Or even if the current President of the USA understood that!).

The good thing is that once you understand the problem you can easily see how to solve it.

To achieve this we have to stop burning fossil fuels and power the world economy using renewable energy instead. And at the same time stop burning or cutting down forests and instead sequester carbon out of the atmosphere by planting billions more trees (and other plants), and using regenerative farming methods.

The hard part is explaining the above to everyone and then getting them to change their ways (quickly) so they can help create a better future in which we live in harmony with the laws of nature.

So, what practical steps can you take to help us stay under 1.5 °C?

Here are a few to get you started:

So know you know, get cracking with solving the biggest issue of our time and be part of creating a better future!

(Kim, I hope that was helpful.)

This article is included in Twinkl’s Eco-Friendly and Sustainability campaign, and is part of their article Some great ideas to be more sustainable in 2021