A New Zealand Free of Plastic Pollution. An Impossible Dream?

As part of the Wellington Rotary Forum 2018 – Impossible Dreams, Nick was asked to be one of the 12 guest speakers. Below is his 10 min speech.

Can I ask you to please raise your hand if at some time today you walked past a piece of trash?

Now keeping your hands up take a look around the room.

This is the reality of Aotearoa New Zealand in 2018.

Can I now ask you to keep your hand up if you picked up that piece of trash?

Thank you, you can put your hands down now.

Hi, I’m Nick Morrison and it’s my dream that Wellington and New Zealand returns to being a land (and waters) free of plastic pollution.

It’s hard to remember exactly when my journey to help solve the plastic pollution crisis began, but I have two vivid memories I want to share with you. I remember standing in a London supermarket, where I used to live, with a plastic bag in hand reading an article about the millions of plastic bags going to landfill every day, and being hit by the realisation that I was part of that problem. I was one of the mindless consumers contributing to that shocking amount of plastic pollution.

I also remember being in the San Blas Islands, an archipelago between Panama and Colombia about three years ago, standing on a beautiful Island in the Caribbean sea and looking down at a beach covered in plastic with a heavy heart wondering to myself why are humans doing this to our only home, and how do we solve it.

Globally we now produce over 300 million tonnes of this solid petrochemical material every year with 40-50% of that being single-use products. Somewhere between just and 9-15% of that 300 million tonnes is recycled, around 12% incinerated, and the rest is dumped in landfills and the open environment. Every year.

And every year 8 million tonnes of plastic enter the world’s oceans.

But, what is even scarier is that we are expected to double our production of plastics in the next 20 years and that by 2050 (just 32 years from now) there will be more plastic than fish in the worlds ocean by weight.

What a proud moment for us all that will be.

It’s hard to fathom those numbers. And I think one of our major challenges is to better explain those to people. So I want you to take a moment to think how heavy, or how light a plastic bag is, or a plastic bottle, or some plastic cling film. Now try and imagine how much a tonne of plastic is. Then 100 tonnes, a million, 8 million, the amount that goes into the world’s oceans every year, and finally 300 million tonnes the amount produced every 12 months.

Now you are (kind of) comprehending those numbers it’s really important to remember that plastic is a synthetic material, not created by nature, so nature has not evolved a way of dealing with it. Plastic doesn’t biodegrade back into carbon, nitrogen, water and biomass to continue on in the circle of life as natural materials do. No, instead, over time it breaks apart into smaller and smaller pieces.

Microplastics have now been found in drinking water (both bottles and tap), fish and salt obviously, soil of course, but most alarmingly of all… Beer! I mean come on!! Surely this is motivation for us all to make changes to our plastic habits!

I came home to New Zealand 3 and a half years ago with a real sense of wanting to help solve this massive global problem, then I learnt about New Zealand’s embarrassing waste and pollution statistics. 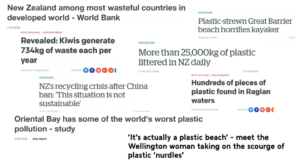 We may not produce the same total amount of plastic pollution as the bigger countries around the world but on a per capita basis, we have been ranked as the worst in the developed world, and worse than many “undeveloped” countries.

That’s not the New Zealand I grew up in and I truly believe we are capable of so much more.

To bring it closer to home, earlier this year researches from the American not for profit the 5 Gyres Institute, who consult to the United Nations, came to Oriental Bay and found it to be one of the worst beaches they had ever surveyed.

And now this picture – taken by a friend of mine, Camden Howitt Co-Founder of the charity organisation Sustainable Coastlines. This photo was taken just a few weeks back at Evans Bay here in Wellington, and shows what is known as “Plastic Sand”. Yea that’s a thing now. Plastic sand. 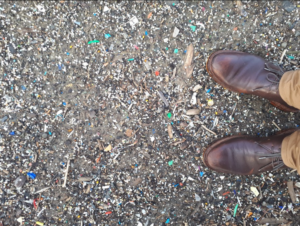 Thousands and thousands of pieces of “primary microplastics” (resin pellets from plastics manufacturing) and “secondary microplastics” (broken down pieces of plastic products that have been directly thrown into the environment or have escaped waste collection systems).

Knowing what I do about plastic pollution and seeing what I’ve seen, both here in 100% Pure New Zealand and overseas, I simply couldn’t remain quiet

So I started to speak up.

I still remember posting my first bit of Facebook activism shortly after arriving home from my travels. My friends would scoff as I have since posted hundreds more times about the issue, but that first one took some real courage. I saw an article about how over 2.5 tonnes of plastic was being littered every day in New Zealand. I felt so embarrassed, angry, confused, helpless and sad I had to do something. A Facebook post was the beginning of my action.

But since that, a lot has happened.

In May 2017 I met with the chairman of the advertising agency BCG2, James Blackwood after he read my second open letter to the former Environment Minister. And after the meeting, James agreed to help me put together a nationwide campaign to engage, inspire, and help Kiwis to learn a new behaviour of always taking a bag shopping and how to ultimate change their plastic habits.

Bags Not was born.

We brought it to market March this year after many months of hard work, and then just a couple of weeks ago I was invited to attend the government’s recent announcement that they would be phasing out plastic bags. I just about ran up and kissed Jacinda when she announced it.

As happy as I am about the government showing leadership on this crisis I’ve always said that plastic bags are just the tip of the iceberg. They are the poster child for not only plastic pollution and our throw-away lifestyles, but for the unsustainable linear economy.

We extract materials from the biosphere at greater and greater cost and risk to the environment and communities. Then we make products, many of which are completely useless, and then we dump them. Mostly in a hole in the ground but often also just into the natural environment.

What do we think is going to happen?

We quite simply have to live within the laws of nature, and we have to transition to a circular economy. One in which there is no waste, and products and systems are redesigned so as to keep the resources we have extracted in a circular, eternal flow.

To be clear, I’m not saying to rid the world of plastic. Not at all. Plastic is an incredibly useful and helpful material that has revolutionised our lives, but we fundamentally have to change our relationship with it. We have to treat it as a longtime lover, not a one night stand.

Trust me it’s not that hard. 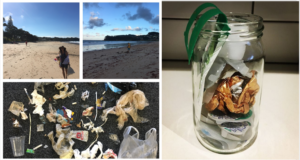 The image on the right is all the plastic I used during July this year as part of the Plastic Free July Challenge. On the left is the plastic trash my partner and I collected in 15 minutes on Langs Beach, 1 hour north of Auckland.

Further to picking up plastic from our environment, we need solutions to stop more from being produced.

Imagine if we had an urban network of food growing within the city? Grow the food right beside the market and pick it to order. All of a sudden there isn’t the need for plastic to be used to transport the produce or to give it a longer shelf life.

Imagine if we made all takeaway food packaging from plant material. Even better if it was made of the waste products generated by industries such as forestry, fishery, and agriculture?

This packaging could then be composted along with the cities food scraps in an urban network of hot composting. The resulting compost is used to feed the soil and help grow nutritious produce. And the biological energy from the hot composting being used to heat water.

What if milk was delivered to your door in glass bottles, or there were local drink vending machines that you could fill up your own reused bottles? And what if… you didn’t line your rubbish bin with anything…? Just the bare bin.

In fact, I dare you all to try it. For one week. And let’s see if the economy crashes, global warming skyrockets or the world stops spinning. Or if you just reduce your use of unnecessary plastic

See. if we are going to solve this crisis, then we all have to make changes. These individual changes may seem small, but collectively they will make a big impact and they will drive more change.

To me, solving the plastic pollution crisis is not a pain in the arse we have to endure, but it is a massive opportunity to engage, unite and promote a New Zealand that collectively works together to restore our environment and enhance our society. I truly believe New Zealand can be a world leader in the transition to a circular, regenerative economy free of plastic pollution.