We gotta change the economy.

The world is in deep shit and it’s because of the economy we made up.

The time for sticking your head in the sand and ignoring all the scientists (who are literally screaming their voice boxes out as they try desperately to inform humanity of the impending doom) is well and truly over (and An Inconvenient Truth was released 13 years ago!). 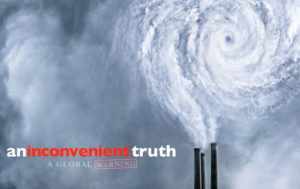 Can we please just own up to the fact that this current economic model is flawed, incentivises destructive behaviours, and is not sustainable then crack on with quickly developing a new one that won’t destroy us?

There are climate scientists who say it’s too late, we are doomed. They say that the damage we have already done to our planet is irreversible. But my understanding of climate science and physics is at a level that allows me to still have hope, and my belief in the ability of human beings to learn, change, connect, and come together to solve huge problems strengthens this hope.

My understanding of science, economics, and the natural world is enough to understand that how we are currently living, trading, and doing business is completely disrupting the world’s natural systems and is leading humanity towards a Mad Max style future for the generations who follow. But it is not at a level to understand where the tipping point is at which we can’t undo the damage.

Sometimes I wish I lived in the same ignorant bliss as cricket commentator Simon Doull who recently said live on air “if you listen to the people who believe in that climate change rubbish, then it’ll be sunny again and we’ll be complaining about the heat.” (Where would Doully be now with his deep understanding of physics, and climate science if it wasn’t for cricket…?)

As we all are, I am on my own journey of learning and discovery about the state of the world and there is much I don’t understand, and I have much still to learn. But one thing has become really apparent to me – a linear economic model is never going to work in a circular world.

Look at nature. Everything grows, then dies, then decays and that cycle just keeps on keeping on, there is no waste and resources are not mined to make a shareholder return. 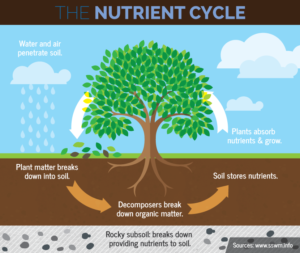 We are pushing the planet to (and past) it’s ecological limits due to the fact we are unbalancing it’s established and proven systems. All due to an economic rule book that was written up a few decades (or centuries) ago, and continues to be tampered with.

Remember that the planets natural systems have evolved over somewhere near 4 BILLION years. That’s about how long there has been life on earth (scientists have worked this out using radiometric dating). That is a long time for trial and error and for the natural world to balance itself out into the ‘Goldilocks’ conditions that create the complex life we see on planet earth today (and don’t see on any other planets in the explored universe I might add).  So much time in fact that planet earth has experienced 5 great extinction events (we are currently in the 6th), but yet life has survived and thrived again and again.

Now compare that with the mere 250 or so years since the industrial revolution and the mass burning of fossil fuels began (generally considered to have begun in Great Britain around 1760) , or the minor 40 or so years we have been running the current “neoliberal” or “free market” economy that continually deregulates businesses and industries so they don’t pay for the environmental, and the social harms they cause (externalities). Further to that, many companies then stick their profits in offshore tax havens so they don’t contribute fairly to the infrastructure or social service costs of the countries they extract wealth from.

Yet in that historical blink of an eye, we have created the Anthropocene (a period of the Earth’s history in which humans have had a significant impact on ecosystems and the planet’s geology) and changed the global climate.

How was an industrial, linear, deregulated economy ever going to be a sustainable and fair model?

Were the economists who developed it (commonly attributed to Milton Friedman ) and the politicians who implemented it (commonly attributed to Margaret Thatcher and Ronald Reagan) looking 40 years into the future? Did they have a complete understanding of how big the world’s population would balloon to, or how much stress extracting, making, and dumping resources would put on the earth’s natural systems? Did they even understand physics and the earth’s natural systems??

Now in 2019 with thousands of satellites flying around planet earth (and beyond!), with incredibly powerful technology we can hold in our hands, with a deep understanding of quantum physics (the study of the smallest scales of energy levels of atoms and subatomic particles), and with the internet we know beyond all doubt that human beings are causing devastating damage to our planet.

Even without all that technology and development, we can see it ourselves. We can see the trash in our streets, we can see the polluted rivers and the no swimming signs, we can see the eroding land, and we notice there aren’t as many bugs on our car windscreens as when we were children. 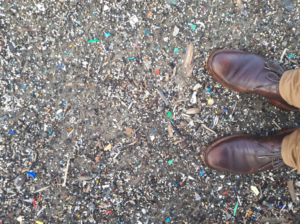 The above photo was taken by Camden Howitt, of Sustainable Coastlines, on the 10th of August 2018 at Evans Bay in Wellington. They call this “plastic sand”. A massive accumulation of secondary and primary microplastics on a beach. A clear indication of the level of plastic pollution in New Zealand driving by our linear use of plastics. Extract – make -dispose.

So the question for me is how long will we continue on with an economic model that can not be sustained, fights against the worlds natural billion-year-old systems, cause so much environmental harm, massively concentrates wealth to just a few, and is destined to collapse. How can we have infinite growth in a finite world?

We are capable of making this world clean, fair, equal, and sustainable. Of course we are! It just involves us making some fundamental changes to how we live, generate energy, get around, trade, do business and what makes up our diets. Some of these changes will be big while others will be so small you won’t even notice, but collectively they will add up to have a hugely positive impact (e.g not using plastic bags – I couldn’t not mention plastic bags #sorrynotsorry).

So instead of an industrial, linear, deregulated economic model based on the use of fossil fuels, the extraction of natural resources, and the dumping of waste – how about we create a regenerative economy in line with the earth’s natural systems? An economy in which profit is made from regenerating and restoring the environment and communities, not degrading them. An economy that makes people healthier and distributes wealth fairly, not one in which the world’s 26 richest people own as much as the poorest 50% (Seriously!!!)

Or how about a circular economy? One in which there is no waste but instead all resources continue in a circular flow or are returned to natures circle of life. Products are designed to be easily fixed, upgraded, repurposed, reused, remanufactured or, lastly, recycled. An economy where products are replaced by services.

Rather than buying a light bulb you buy the light. The customers simply pay a fee for the light they use. The company maintains ownership of the light bulbs (and other parts), replaces them if they break, and keeps the materials to refurbish, remanufacture, or recycle back into new bulbs at the end of life, or end of service period. No need for the business to extract virgin material while securing them a supply of resources free from the volatility of commodity markets,  saving them money, and reducing their environmental impact.

Or a sharing economy (which many of you would have already used in the form of Air Bnb, or Zoomy – the NZ version of Uber who pay tax here), so rather than everyone on your street owning a hammer, or a lawnmower, or a ladder, just one or two people do and they are shared. In the instance of Air BnB and Zoomy, they have very successfully monetised it. How long until someone monetizes the sharing of tools?

Or how about combining all of those with an economy that produces no greenhouse gas emissions. A regenerative, circular, sharing, carbon-neutral economy!

Get on board folks, grab the huge opportunities, and help create a better economy for all.

Because we know we can’t keep doing what we’ve been doing an expecting different results. That would be insanity…